This is a post about the genesis, exodus, and resurrection of a book. It’s for anyone who’s ever got 20K words into a project and thought, “…oh shit”, aka most writers. Gather round.

Some time ago, I came up with an idea for a romance trilogy. It would be Victorian London and it would focus on the people who don’t normally get romance novels—not just in terms of sexuality, gender and race but also class and occupation. My working name was “The Other Victorians”, based on Steven Marcus’s landmark study of Victorian pornography. Here’s the publisher pitch.

Set in the 1870s, among the dubious, the déclassé, and the dishonest, The Other Victorians is a romance trilogy about high birth, low life, inheritance, family secrets, blackmail, betrayal, deception, murder, the love that dare not speak its name, and the love that speaks its name very clearly indeed from inside plain brown wrappers.

The premise of book 1 was that one hero is an earl’s bastard, who works as a pornographic bookseller. The brother dies leaving a collection of dirty photos, a suspiciously large number of which depict rent boys who have been murdered. Our hero goes to a crusading lawyer he used to know, hoping to dump the problem on his lap. This sets off the romance whereby the self-righteous firebrand needs to loosen up while the self-centred bookseller has to rediscover his moral centre. Shenanigans ensue including two intertwined crime plots, and a lot of bonking. Sounds pretty good, yes?

I hated every word I wrote including ‘and’ and ‘the’ (as Dorothy Parker nearly said). I gouged out twenty thousand miserable words by sheer bloody-mindedness, and by the point I stalled for good I was considering faking my own death.

As it happens we were at my parents’ house for half term, and my mum has a sideline as a careers coach. She sat me down for a session to talk through whatever the issue was. We made pros and cons lists for writing it. (Pro: I’ve signed a contract so I have to. Con: I hate the book, the story, the concept, and the characters.) It culminated in her telling me to visualise the book sitting on a chair opposite me and asking me to describe my relationship to it, and me saying, “I don’t have one.”

At which point, because she’s rather good at her job, my mum said, “Well, what do you want to write?” She listened patiently while I yattered about how I hated my characters because they were basically not nice people and I didn’t want to write three books about these harsh, unkind people at war, I just wanted to write someone kind, and interesting, and I’d been looking into Victorian taxidermy recently and I really fancied writing a taxidermist because, like, if you actually look into Victorian taxidermy it’s not all weirdos killing sacks of kittens to pose them like Sylvanian Families, it was a real applied art that could be done with incredible sensitivity almost as a branch of natural history. Then she looked at me in the way mums do until I said, “…so maybe I could talk to my editor about changing the synopsis?” and she said, yes, why don’t you do that. Dear.

I learned a bunch of stuff from this. Most importantly, I realised when I started writing version 2 that actually the trilogy wasn’t about dodgy geezers as the pitch had said, it just featured them. What it was actually about was kindness to others: that was the deep theme of all three romantic conflicts and the overarching plot, and ended up becoming the series title. (It’s now called Sins of the Cities, which refers to the sin of Sodom: “She and her daughters were arrogant, overfed and unconcerned; they did not help the poor and needy.”) That was an important realisation for me on a lot of levels. I have tended not to know what my books are about until they’re published, but it turns out that it’s pretty helpful if you work out what your subconscious is trying to write during rather than after the part where you type words.

So. There I was, finished the series, wrote some other stuff, left 20K of abandoned book throbbing in a file called USELESS. 20K is a lot of work and this 20k had been more than most. A year or so later, I opened it, wondering if I’d still hate it as much, and…

It was almost embarrassingly obvious. The characters weren’t bad: the problem was that I’d told them wrong. I’d focused on the angry clashing swords and shields, not the vulnerable bits they protected. But—and possibly because?—the actual big block was the whole ‘murdered rent boys’ plot. That was not a story I wanted to tell. There’s already infinitely too many stories about queer people being murdered for their sexuality or identity, and it’s not my job to add to piles of pain. I couldn’t write that story because I had no goddamn business writing that story, on a number of levels, and my subconscious knew it even if I didn’t. Thank you, lizard brain.

However. If that wasn’t the story…if I removed the macho posturing from the characters and the stuff I didn’t want to write from the plot…if I focused in on love, not hate or fear, and let the story flow from there…

Ding ding ding. I rewrote the existing 20K in two days, had the second half down in a week flat, and it’s coming out tomorrow (10 July) as Unfit to Print. There’s still the Holywell Street setting, the illegitimate earl’s son turned bookseller, the crusading lawyer, even a murder to solve–but the entire feel of the book is so different from the first draft it’s startling to me. It’s now a story about love lost and found, about rebuilding trust and letting yourself be vulnerable, about opening up rather than closing down. Turns out I work better if I’m lighting a candle rather than cursing the darkness. Who knew.

What can you learn from this? Don’t ask me; do I sound like I know what I’m doing? But here are my takeaways for getting stuck on a book:

This is not to say that every project that isn’t working should be dropped, or that every dropped project can be salvaged. But if you look at the twin questions of “what am I actually writing here?” and “do I actually want to be writing it?” you may find a lot becomes clear. 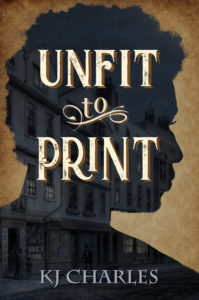 When crusading lawyer Vikram Pandey sets out in search of a missing youth, his investigations take him to Holywell Street, London’s most notorious address. He expects to find a disgraceful array of sordid bookshops. He doesn’t expect one of them to be run by the long-lost friend whose disappearance and presumed death he’s been mourning for thirteen years.

Gil Lawless became a Holywell Street bookseller for his own reasons, and he’s damned if he’s going to apologise or listen to moralising from anyone. Not even Vikram; not even if the once-beloved boy has grown into a man who makes his mouth water.

Now the upright lawyer and the illicit bookseller need to work together to track down the missing boy. And on the way, they may even learn if there’s more than just memory and old affection binding them together…

More on the Sins of the Cities series (aka the one with the taxidermist).