There is a recurrent thing in discussions of romance novels which bubbles up every couple of months: Books That Aren’t Romance Being Listed As Romance.

Obviously this isn’t car manuals sneaking their way in. It’s books that are marketed as romance novels (or series) when one of the protagonists dies, or they part for good, or the romantic relationship in which we’re invested is otherwise ended or ruined. It’s lists of romance novels that include, say, Wuthering Heights, where they both die and about time too, or Me Before You, where the disabled hero serves the heroine’s emotional growth and then commits suicide (shall we not), or much of Nicholas Sparks’ oeuvre (death and tragedy represent) and so on and so forth. These are stories about romance and romantic relationships, yes, but they aren’t romance novels.

Let’s do a thing. Think of the one word that defines the romance genre. What is it you go to romance specifically for, what are you expecting and needing to find? I’ll give you a clue, it’s got four letters, ends with ‘e’.

If you said ‘love’ go to the back of the room. You get love in all kinds of books, including those mentioned above. The guy in Lolita is in love, in his way, and if you call that a romance we have a problem.

What romance novels specifically offer us is hope.  Hope that two people can come together and be better happier humans as a result. Hope that marginalised or disregarded or unhappy people can find love and joy in a hard world; hope that however flawed you are, however scared, however much you feel like a piece of the jigsaw that doesn’t fit, there is a place and a person for whom you are just right; hope for the future. That’s the HEA/HFN promise that the romance genre offers (Happy Ever After/Happy For Now) and the key word there is happy. If a book doesn’t fulfil that by leaving us with the protagonists happy and together (for whatever definition of happy and together works for them) and us hopeful for their future as individuals and as lovers, it is not a romance novel.

This isn’t a criticism of books without HEA/HFN. Wuthering Heights isn’t a bad book because Heathcliff and Cathy don’t live happily ever after; it would be a far worse book if they did. It’s absolutely fine not to have an HEA/HFN. It just isn’t a romance novel without one.

Nor is this, as many idiots think, an indictment of the romance genre. The HEA/HFN requirement is not a limitation, it’s a definition. The HEA/HFN is to a romance novel as being warm-blooded is to a mammal: you can have a lot of variety within that classification, but if you don’t have that specific characteristic, you’re not part of that kingdom.

The reason this taxonomical stuff matters is because when you market a book–when you give it a title of a certain sort, with carefully chosen typography and cover treatment and a well-crafted blurb–you are making readers a promise as to what they’ll get. Imagine a book called The Sallow Road. The blurb reads, “In a surreal land, a young girl kills the first person she meets and then teams up with three strangers to kill again.” The cover shows a shadowy road stretching through disturbingly unnatural scenery, and four odd-shaped silhouettes: three sinister humanoids, the fourth all too clearly a schoolgirl. All that adds up to some kind of warped dystopian fantasy horror, quite possibly by Clive Barker. And the reader will thus have every right to be annoyed when they open it to read, “Dorothy lived in the midst of the great Kansas prairies, with Uncle Henry, who was a farmer, and Aunt Em, who was the farmer’s wife.” (Credit to Rick Polito for this amazing blurb for The Wizard of Oz, tweaked for my purposes.)

Say I write a novel where we see a named person commit a murder in the first chapter, and the book is about the murderer living undetected, and the impact of the unexplained death, which is never suspected or investigated, on her and on the people around her. This sounds like a pretty good read in a dark Gothic psychodrama way, or even a savage social satire, but the one thing it isn’t is a detective novel. Detective novels need a crime to be solved and a solution, and if I market my no-puzzle no-solution book as a detective novel with a mystery-type title and cover and blurb, and my advertising is specifically directed at detective-novel readers, I will get a lot of angry one-stars on Goodreads. This doesn’t say anything meaningful about the merits of my book vs the detective-novel genre as a whole, or about reader expectations vs the right of authors to tell whatever story they like. It’s just the inevitable consequence of offering A for sale and then supplying the purchaser with B.

Let’s put this another way because I’m hungry: You order gazpacho for lunch. You sit there happily awaiting the cool joy of a cold, tangy, refreshing tomato-based soup with a garlicky kick. And what you get instead is a hot, steaming bowl of minestrone. “What?” says the waiter. “It’s a Mediterranean tomato-based soup with vegetables and garlic, isn’t it? Yes, fine, I told you I’d bring you gazpacho, but don’t you think it’s a bit childish and predictable to expect every bowl of gazpacho to be cold? This isn’t your mother’s gazpacho! We’re reinventing soup!”

Well, you might eat the minestrone; you might even love it. But I suspect you’d be far more likely to send it back and/or leave a one-star on TripAdvisor, because you ordered gazpacho, your tastebuds are lined up for gazpacho, your personal circumstances, sitting in a Spanish courtyard on a hot day, are calling for gazpacho, and in the end it doesn’t matter how good the minestrone might be because if you’d wanted goddamn minestrone, you would have ordered goddamn minestrone. And this goes for the people who are ‘reinventing romance novels’ by writing things that aren’t romance novels but marketing them as romance novels in the hope of getting a slice of the largest and most voracious reading demographic, and then claim to be doing something special instead of just misleading advertising.

Of course some people can play with genre and even change (some of) the rules. Agatha Christie turned detective novels on their head with The Murder of Roger Ackroyd. (I won’t spoiler: if you don’t know the twist do not Google, just read it.) There was a furious outcry and it remains a jaw-dropper even now. Sometimes you positively want to be played with: Heston Blumenthal’s three-Michelin-starred restaurant The Fat Duck, is all about presenting you with a thing that your eyes/brain say will taste a certain way, but does not, and it is indeed amazing. That’s fine for Agatha Christie, and a selling point for Heston Blumenthal. But it isn’t a licence for every passing jerk to serve minestrone while selling it as gazpacho.

When I pick up a romance novel, I might get werewolves; I might get dukes. I might get people desperately carving out happiness in dark oppressive periods of history, or a demographically implausible special ops team, or a small town where every family has six hot brothers who get married in birth order, or pretty much anything else. But what I am sure I’ll get when I close the book (or finish the series) is a sense of hope. Of love that lifts up the people involved, of people caught in a golden moment, of joy and fulfilment and things just being right, for once. That’s why people read romance novels, that is what romance novels do, and if you promise us that catharsis and snatch it away, you’re letting readers down.

It’s as simple as that. Don’t make false promises and you won’t get angry readers. (Well, not about that particular subject at least.) And if your question is “But KJ, how do I get my hands on all that sweet romance cash if I don’t want to write yawnsome predictable happy endings that don’t satisfy my soul’s dark cravings/desire for higher literary status?”, my answer is: You don’t, so don’t call your stuff romance and we’ll all be fine.

Relevant to the above: My new book The Henchmen of Zenda is a queered version of the classic pulp adventure The Prisoner of Zenda. It’s packed with sex, swordfights, and skulduggery, and I had an enormous amount of fun with it. I would probably call it “pulp adventure with strong romantic elements”, and romance readers who need to know about endings first should check my GR review and click on the spoilers.

Swordfights, lust, betrayal, murder: just another day for a henchman. 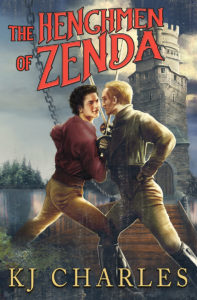 Jasper Detchard is a disgraced British officer, now selling his blade to the highest bidder. Currently that’s Michael Elphberg, half-brother to the King of Ruritania. Michael wants the throne for himself, and Jasper is one of the scoundrels he hires to help him take it. But when Michael makes his move, things don’t go entirely to plan—and the penalty for treason is death.

Rupert of Hentzau is Michael’s newest addition to his sinister band of henchmen. Charming, lethal, and intolerably handsome, Rupert is out for his own ends—which seem to include getting Jasper into bed. But Jasper needs to work out what Rupert’s really up to amid a maelstrom of plots, swordfights, scheming, impersonation, desire, betrayal, and murder.

Nobody can be trusted. Everyone has a secret. And love is the worst mistake you can make.

A retelling of the swashbuckling classic The Prisoner of Zenda from a very different point of view.

…a classic ripping yarn of swashbuckling Ruritanian highjinks, which is unabashedly gay AF.

… KJ Charles is always a delight and this book is no exception – her nuanced exploration of historical queer identities and her restoration of women into the narrative puts the complexity of history back on the page. Sarcasm, swordfights, and sex – what’s not to love?

… a story with murder, treason, double and triple crosses, where characters change allegiances every few chapters, where all the players have their own motives, and the reader is left breathless, wondering what in the hell could possibly happen next.