Look, I would not normally blog about my holidays, but seriously. Mr KJC and I ditched the kids and went to Burma (now, but disputedly, called Myanmar) and it was perhaps the most extraordinarily interesting and beautiful place I’ve ever been. It’s also hauling itself out of the grinding poverty caused by years of abuse by the psychotic regime of the generals, and tourism is playing a large part in that, so I wanted to share the love. Plus I’ve had so many people ask about it that this seems the only sensible place to answer everyone at once. So without further ado, here are my holiday snaps. Feel free to bail out now.

It’s hot there. We went in December, the depths of winter, and it was maybe 33 in Yangon, 28-30 in Bagan. However, the nights are cold everywhere except Yangon. We went to a hill station, Kalaw, and it was about 4 degrees at night. Staying in unheated houses on our hill walk was bitter. Bring a jumper and thermal pyjamas if trekking.

December was getting very dusty and dry. Given the choice I’d suggest going in October, when the rainy season is recently over and everything is fresh and in bloom. 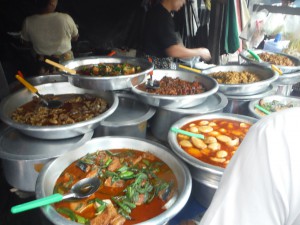 You basically point at what you want from a selection of dishes, although the honest answer is ‘all of it’.

Lots of curries and tons of vegetables. People will ask if you like it spicy with almost too much regard for timid Western palates. 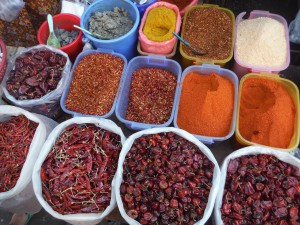 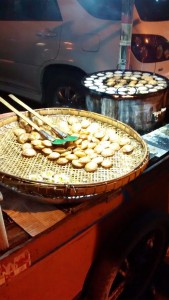 I want these. I want them now.

You can’t drink the tap water, but pretty much everywhere uses bottled water for ice and often to wash vegetables for salad (an environmental disaster, I know). The only thing that made me sick were the malaria pills, which weren’t even necessary. Not only is there no malaria on the main tourist trail, I didn’t get bitten by a mosquito once, and I am normally an all-you-can-eat blood bonanza.

It’s really safe. No sexual hassle, no sense of threat anywhere–except on one occasion where our guide got in the way of a military person on holiday, who went psychotically, frighteningly Taxi Driver on us, screaming with unfettered rage, spittle flying–because someone had spoiled his photo. That was a reminder that the country is still emerging from the grip of one of the worst regimes in the world. So was the man we met who reminisced about his friends being jailed for eight years after the failed 1988 rebellion and emerging from prison utterly broken in mind and body. Terrible, terrible things have been done to this country. It still felt like a good place of good people. It deserves so much better. 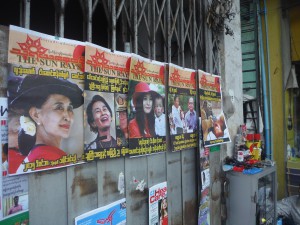 Aung San Suu Kyi is basically everywhere. People put so much faith in her. Please God.

All the guidebooks say to bring fresh, new, unfolded dollars. They aren’t kidding; people will hand tatty ones back. Same for 5000 kyat notes. Smaller denominations tend to resemble snot rags, and that appears to be fine.

This is a Buddhist country. You need sandals that can be easily slipped off for visiting temples, and clothes that cover your knees and shoulders. Don’t be that tourist. I brought a bunch of stuff and ended up wearing a longyi most of the time because they’re so absurdly comfortable. So did Mr KJC in the end. 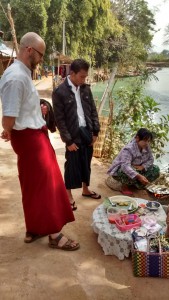 Mr KJC and guide Nyi-nyi engaged in our main holiday occupation: getting snacks.

There is very little hassle, people are polite and dignified. Our guides took us to a lot of places like jaggery (palm sugar) makers, cigar makers, silver workshops etc. 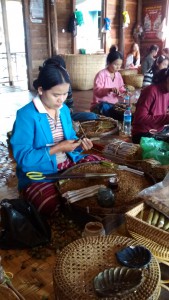 This is the sort of thing I have always tended to avoid the hell out of, but at the moment this is still people working by hand, with extraordinary skills, using incredibly intricate traditional techniques, really worth seeing, and producing fantastic work. We brought *so much stuff* home. 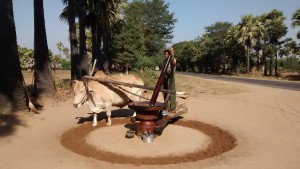 Palm sugar grinder. NB: jaggery is basically what you get if you cross sweeties and crack. Especially tamarind jaggery. Excuse me while I check my stash.

Perhaps the worst thing I saw on my travels was in a fairtrade shop for a charity that is attempting to bring water tanks to rural villages, where women have to walk miles each way on mountain roads to get water. The shop was selling handmade goods like a hand-woven bag of wonderful quality for $12. A tourist–a European tourist who was doubtless spending thousands of Euros on her holiday–stood in there and bargained to drive down the price of fairtrade goods being sold for the benefit of people so poor their lives are basically medieval. What the hell can you say about people like that. 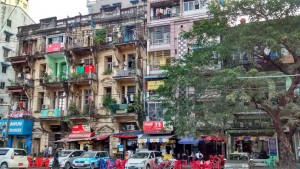 A thriving city visibly transforming itself into a modern capital, but still with markets on many corners, restaurants where you eat sitting on plastic stools on the road, missing paving slabs through which you can fall into open sewage, packs of dogs roaming the street and howling at night. 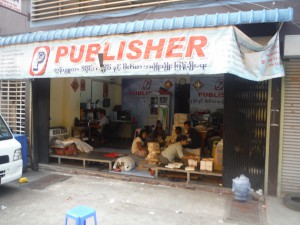 Spiritually speaking, all publishers are this

If you like cities, this is the absolute best; we stayed five days, just roaming through crowded streets, checking out the crumbling colonial architecture, exploring the fabulous markets, eating any amount of wonderful things, and people-watching. 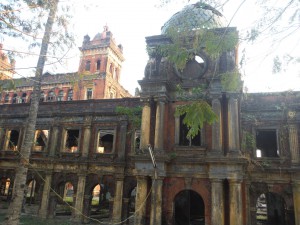 The old colonial seat of British government. Look on my works, ye Mighty…

If you don’t like cities, just go to Shwedagon Paya, which is pretty much a Buddhist St Mark’s Square. 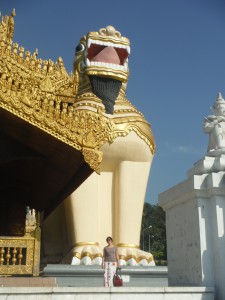 The tiny stick person there is me. The place is big. 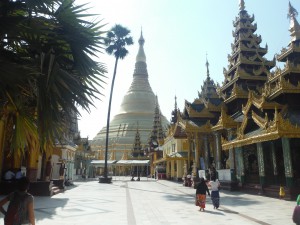 The stupa is covered in real gold, estimated value $30bn, and topped with diamonds. 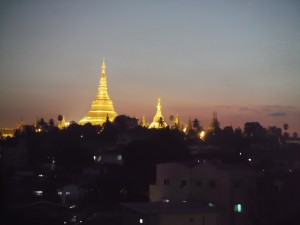 We spent New Years Eve on a rooftop bar with this view of the Shwedagon Paya. Not bad.

World Heritage Site doesn’t begin to describe this. It’s a massive plain with over 2500 pagodas, stupas and temples, many a thousand years old. I mean, there are so many. It’s incomprehensible; it leaves you slack-jawed. 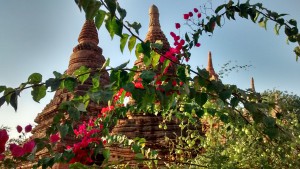 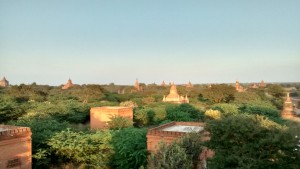 Many have old frescos and paintings, you can go into some of them and watch the sunset over the plain, or splurge on a hot air balloon trip. 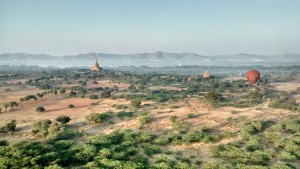 Hti’s Cocktail Bar does the best rum sours we had in Myanmar (the local Mandalay rum is excellent). Their happy hour is a two-for-one deal, which they interpret as ‘if you order two rum sours we’ll bring you four’. I’m not going to argue with that.

A hill station, with plenty of old colonial buildings and a big military presence because of rebels in the northern Shan State. It’s an interesting place to roam. 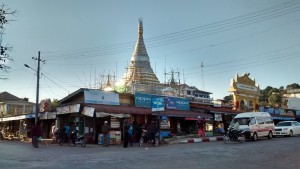 It also has an absolutely fantastic dive bar that only serves rum sours (brutal ones), with everyone huddled round the circular bar from the cold, half locals and half tourists, talking in five languages at once, and a guy on guitar singing Coldplay songs in Burmese.

You could easily walk Kalaw to Inle in two days, one night. (It’s downhill; the other way would be very hard work.) Don’t even think about doing it without a guide, you’re a long way from rescue helicopters here. Our walk looped through fields and forests and over railway lines. 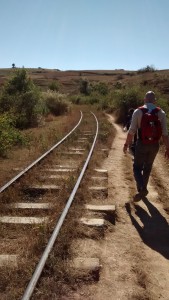 It was outstandingly, staggeringly beautiful. This is a hill walk, you don’t need big trekking boots. Our guide wore flip flops. 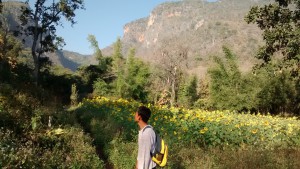 We stopped in various villages. Tribe is still a big thing in Burma, there are maybe 130 ethnic groups, and people in neighbouring villages have mutually incomprehensible languages. 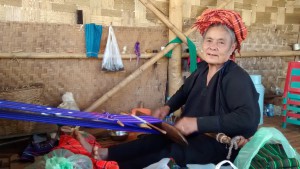 A Pa’O tribeswoman weaving on a hand loom.

Most of the agriculture is done by hand in the hills of the Shan state, and many villages are self sufficient, producing their own oil and rice. 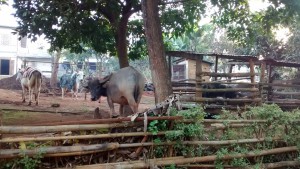 There was no running water where we stayed overnight, electricity only from solar panels, and that very limited. Washing facilities are a bucket of water outside. We brought travel backgammon and played by torchlight because it was pitch dark by 6.30.  The stars were beyond belief.

Glorious. A huge lake fringed by houses on stilts. People grow food on floating rafts of earth and compost that can be moved around and staked into place. I can’t tell you how lovely this place is. 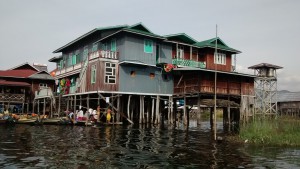 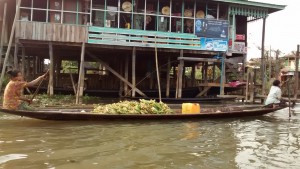 A village off Inle Lake that is basically a big market, and an incredible area of ruined stupas. Just, honestly, jawdropping. 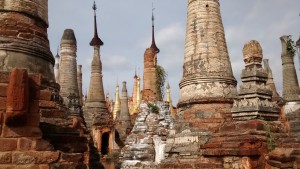 We didn’t go to Mandalay, but everyone we spoke to who did says it’s a concrete traffic jam. We didn’t make it to Mawlamyine either but I really wish we had, it sounds stunning.

Basically, this was the trip of a lifetime and a massive privilege to have the chance, and if you are thinking about it and in a position to go, I can’t say enough good things. Happy to answer questions in the comments!

We had our flights and hotels booked for us, and guides arranged where necessary, through Pro Niti Travel, who are a local firm and were absolutely excellent. I recommend wholeheartedly.