Sins of the Cities is written in the spirit of the Victorian sensation novel (plots, shenanigans, murder, mystery, fog, secrets and scandals). It’s London 1873. As one of the worst fogs of the nineteenth century closes in on the city, long-buried secrets are crawling into the light, and dragging all sorts of trouble with them.

The trilogy centres on a group of friends who meet at the Jack and Knave, a club for ladies and gentlemen of unconventional persuasion. Clem Talleyfer is an unassuming lodging-house keeper who just wants a quiet life; Nathaniel Roy is a lawyer turned journalist who likes nothing more than a crusade; Mark Braglewicz is a private enquiry agent and a bit of a tough nut. And all three are about to find themselves dragged into a long-simmering family secret that turns deadly. 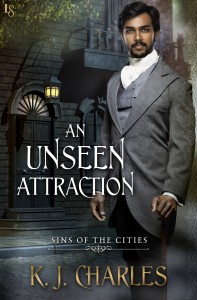 Lodging-house keeper Clem Talleyfer prefers a quiet life. He’s happy with his hobbies, his work—and especially with his lodger Rowley Green, who becomes a friend over long fireside evenings together. If only neat, precise, irresistible Mr. Green were interested in more than friendship . . .

Rowley just wants to be left alone—at least until he meets Clem, with his odd, charming ways and his glorious eyes. Two quiet men, lodging in the same house, coming to an understanding . . . it could be perfect. Then the brutally murdered corpse of another lodger is dumped on their doorstep and their peaceful life is shattered.

Now Clem and Rowley find themselves caught up in a mystery, threatened on all sides by violent men, with a deadly London fog closing in on them. If they’re to see their way through, the pair must learn to share their secrets—and their hearts.

“both an intriguing and engrossing story and a tender romance between two well-drawn protagonists whose unique personality traits inform their emotional and sexual relationships.”–All About Romance

Starred review from Publishers Weekly–“a plot that’s unabashed pulp, made poignant by its effects on the two bruised souls at its center.”

“I never thought taxidermy could be this sexy.”–Aliette de Bodard 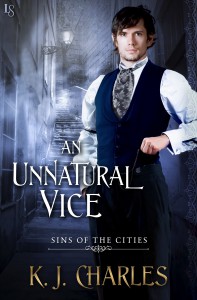 In the sordid streets of Victorian London, unwanted desire flares between two bitter enemies. Crusading journalist Nathaniel Roy is determined to expose spiritualists who exploit the grief of bereaved and vulnerable people. First on his list is the so-called Seer of London, Justin Lazarus. Nathaniel expects him to be a cheap, heartless fraud. He doesn’t expect to meet a man with a sinful smile and the eyes of a fallen angel—or that a shameless swindler will spark his desires for the first time in years.

Justin feels no remorse for the lies he spins during his séances. His gullible clients simply bore him. Hostile, disbelieving, utterly irresistible Nathaniel is a fascinating challenge. And as their battle of wills and wits heats up, Justin finds he can’t stop thinking about the man who’s determined to ruin him.

But Justin and Nathaniel are linked by more than their fast-growing obsession with one another. They are both caught up in an aristocratic family’s secrets, and Justin holds information that could be lethal. As killers, fanatics, and fog close in, Nathaniel is the only man Justin can trust—and, perhaps, the only man he could love.

“A great story that’s excellently written and researched; characters who are well-drawn and appealing; a book that stimulates intellectually as well as emotionally… An Unnatural Vice has it all and is easily one of the best books I’ve read so far this year.”–Romantic Historical Reviews

“the romance shines while still slowly and steadily advancing the larger story.  Though Nathaniel and Justin are attracted to one another from the very start (their chemistry is scorching), their bitterness and mutual animosity is a thing to behold.”–All About Romance, Desert Isle Keeper

“Hot hate-sex that gradually develops into cross-class understanding and respect—now that’s a romance writing achievement that you don’t see every day.” –Romance Novels for Feminists (best of 2017) 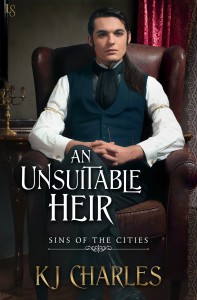 On the trail of an aristocrat’s secret son, enquiry agent Mark Braglewicz finds his quarry in a music hall, performing as a trapeze artist with his twin sister. Graceful, beautiful, elusive, and strong, Pen Starling is like nobody Mark’s ever met—and everything he’s ever wanted. But the long-haired acrobat has an earldom and a fortune to claim.

Pen doesn’t want to live as any sort of man, least of all a nobleman. The thought of being wealthy, titled, and always in the public eye is horrifying. He likes his life now—his days on the trapeze, his nights with Mark. And he won’t be pushed into taking a title that would destroy his soul.

But there’s a killer stalking London’s foggy streets, and more lives than just Pen’s are at risk. Mark decides he must force the reluctant heir from music hall to manor house, to save Pen’s neck. Betrayed by the one man he thought he could trust, Pen never wants to see his lover again. But when the killer comes after him, Pen must find a way to forgive—or he might not live long enough for Mark to make amends.

“I love the way K.J. Charles has incorporated the elements of Victorian popular fiction into her plotlines; the writing is sublime and the characters are three-dimensional people with lives of their own whom I imagine laughing over a pint or two and bantering with Phyllis at the Jack and Knave long after I’ve finished reading their stories.”–All About Romance