Discussions of historical romance frequently break into two factions: those who want their histrom to align with modern values about things like consent, equality, and bigotry, and those who don’t because those weren’t the attitudes of the time and that’s part of historical accuracy.

I am of the former group, even though I bang on about historical accuracy when it comes to stuff like modes of address. I need to be able to see a romance hero as a good person by my standards. The fact that a slave-owner or a homophobe might have been considered a good person (by people he wasn’t maltreating) in 1810 is a matter of profound indifference to me: I’m reading it in 2018, and this guy sucks. I’ll take gritty depictions of the past in other genres, but if you want me to buy into a romance and a Happy-Ever-After, don’t give me heroes that I’d happily set on fire.

This doesn’t mean that I want the past erased. It doesn’t do to forget the vileness of which humans are so readily capable. People’s pain ought not to be lightly handwaved away. And the truths of history are not incompatible with romance, when approached from the right angle. There are histrom authors taking on America’s filthy history to magnificent effect—Alyssa Cole’s Loyal League series with black heroes and heroines during the Civil War is brutal; Piper Huguley and Beverly Jenkins don’t shy away from the corrosive effects of racism; Joanna Chambers’ Enlightenment series keeps the homophobia of Georgian Scotland front and centre. All of these are wonderful. It can be done.

You can’t throw a bun on Romance Twitter without hitting someone defending romance as the genre of hope, of the world as it should be, of escape and happiness and love. Romance creates a fantasy, and historical romance is pretty much always a fantasy no matter how much research we do into the top speed of a phaeton or the exact materials used for a ball dress, or what the hell a peignoir might be. The dukes with abs, the governess marrying a nobleman, the earls with a sideline in espionage: it’s all a fantasy, and that’s absolutely fine because, as I wrote last time, you will take my fluff from my cold dead hands.

And yet there is a powerful strand of opinion that holds that any m/m histrom must reflect the fear of legal persecution, that any romance starring a POC must be about racism and injustice, that marginalised people simply cannot have happy endings, let alone fluffy stories along the way, because history was too cruel.

I’ve been sustained for years by Georgette Heyer’s glorious fantasies of women finding love and respect in a glittering Regency that never was, and my knowledge of the actual period’s brutal politics, deep misogyny, and general nastiness doesn’t undermine that pleasure. That sort of fictional escape should not be denied to readers of colour and/or queer readers–and particularly not on grounds of accuracy or historical realism that are not applied elsewhere.

We know that m/f histrom heroes and heroines are immune to lice, syphilis, terrible dentistry, death in childbirth. We know that the heroine will be safe when the book ends: that her husband won’t use her total financial dependence against her or rape her at will as he could because he now owns her body and all her property. In the right kind of modern histrom, we know from the start that the hero won’t be infected by misogyny or toxic masculinity, and will understand the concept of enthusiastic consent without needing a Basic Human Decency 101 class. All that is part of the histrom fantasy—because wow, was none of that guaranteed to actual women in actual history.

So if someone insists historical romance featuring marginalised people must come with the full complement of historical misery–that nobody could possibly have had a happy life with loving family, friends like themselves, good allies, non-bigoted acquaintances, and avoided running foul of unjust law–I need to know that they are applying the same standards to white m/f.

Of course, many people do exactly that. Most histrom readers expect books to show the oppression of the time to some degree, whether light touch, partial engagement, or full-on harsh reality; some people simply don’t read the genre because the happy gloss doesn’t work for them. Some people find it impossible to let go of the exploitation and colonialism that probably underpin a rich aristocrat’s wealth and privilege (which is a real bummer if you just wanted to enjoy a relaxing escapist duke book). Those are all entirely valid stances and down to the individual.

What is not valid is to be on board with duke/governess stories and all the rest of the glittering balls and yet simultaneously to assert that Regency fluff with POCs is unrealistic, or that m/m love stories must be played out under the shadow of the pillory and the gallows. That is to gatekeep who gets the fantasy and who gets the (worst of) reality. And it’s not only unjust: it’s also as historically inaccurate as it gets.

We can state as a matter of cold hard statistical fact that there were far more happy real-life queer people and people of colour in Regency England than there were handsome eligible dukes. This is simple mathematics, because queer people and people of colour actually existed, whereas the number of desirable dukes can be counted on the fingers of one foot. You want historical realism? Check out this babe. 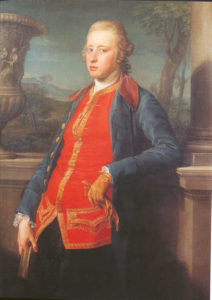 That’s the fifth duke of Devonshire, a repeat adulterer who blamed his wife for having miscarriages, installed his mistress in the family home and made them both pregnant at the same time, and condemned his wife for having an affair while he was fathering numerous illegitimate children with multiple women. She was a writer, supporter of science, and early activist for women’s rights; he was a no-account hypocritical dullard who regarded her with utter indifference and made her life miserable. I don’t think a punny title is going to save this one. Also, those are not romance abs. And this portrait is probably flattering. Wow.

It is of course absolutely fine not to like stuff: modern values in historical romance, or fluff, or the basic concept of setting a romance in terrible unjust times, or anything else. But it’s not okay to support escapist fantasy for some people while denying it to others. And it is particuarly questionable to exclude anyone from a fantasy on grounds of realism. That just isn’t how fantasy works. 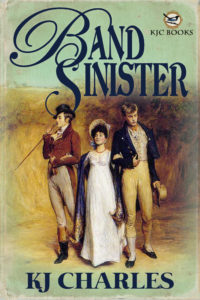 My new book, Band Sinister, comes out 11th October and is pure Regency m/m fluff with a bastard baronet, an innocent country gentleman, a hellfire club, and a 100% happy ever after.

Out tomorrow at the time of writing, from the usual stores.