I was drifting through Twitter, as so often, when I came across this series of tweets by @quartzen. Text copied below for ease of reading. 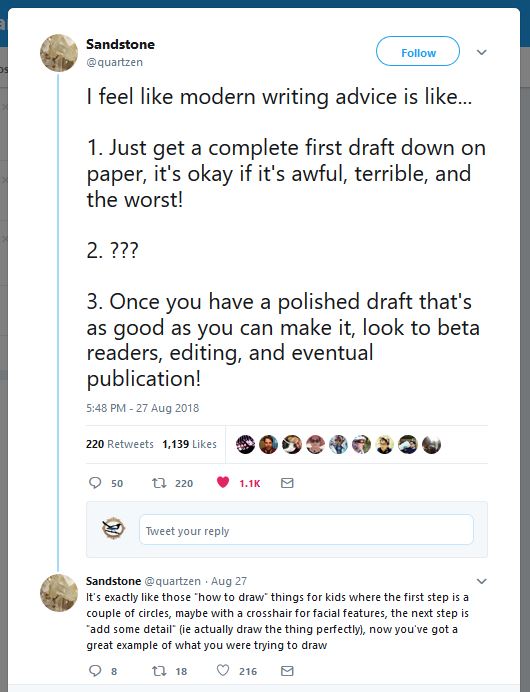 It’s exactly like those “how to draw” things for kids where the first step is a couple of circles, maybe with a crosshair for facial features, the next step is “add some detail” (ie actually draw the thing perfectly), now you’ve got a great example of what you were trying to draw

Part of the reason Step 2 is usually missing is that it’s hard to give advice that applies to everyone. Some authors throw down a skeleton plot in their first draft that needs fleshing out; some people create well-developed worlds and characters first off, but have to go back and insert a skeleton to give their wobbling mass some story-bones. Some people go through multiple completed drafts; others find out what they’re doing while writing a much-revised first half of a first draft. (I’m that person. Generally speaking I loop over and over my first half to get everything in place, and then once I have that sorted it’s a straight trot to the end and I very rarely have to make significant changes to the second half.)

Also, each author changes with each book–you may find that Project X starts with a plot but Y is entirely character driven. Step 2 will be different not only for every author but for every author’s every MS.

All that said there’s a few broader points that we can apply: not to give specifics but to give a bit more shape to what Step 2 looks like.

2.i Work out what’s missing from your draft

Look at what you’ve got. Is it a well developed plot, populated with two-dimensional characters just doing what the story needs? Is it a lot of enjoyable interactions between well developed characters, but which wanders from place to place without a driving story? Have you gone big on the descriptions and low on the action, or vice versa? Are all the pieces there on the page, but it hasn’t come to life? Or is it a mass of inconsistent ideas glued together with willpower and fast typing?

Working out what’s missing from your story is not entirely easy because if you knew you’d have put it in already. It takes practice to identify these things. Unfortunately you really can’t assume a crit partner will do this bit for you–they’d have to be very good, omnipatient, and possessed of unlimited time. You really need to learn this yourself, which means being analytical, not too enamoured of your own work, and ready to kill your darlings.

So how to find your lacunae? Here are a bunch of general questions to consider:

Are my characters consistent?

It’s very common in a first draft for the heroine to start out motivated to avenge her brother’s death/terrified of public speaking/passionate about establishing her cupcake business, and then the author basically forgets about that, or switches that bit of motivation on and off depending on the requirements of the scene. It’s fine if your plot/character diverges from initial ideas, that’s what drafts are for, but you need to notice, go back, and tidy those up so your characters are consistent within their own messy humanity. If your characters’ behaviour is based on the exigencies of the plot from moment to moment, they won’t work as people.

And yes, this goes for minor characters too, especially villains. If your villain’s sole motivation is wanting to make the hero/ine unhappy, you need a damn good reason why, unless they are to be Darth Plotfunction.

Do I have a functioning skeleton for my book?

Writing a synopsis can be quite a useful way to work this out. If, for example, you discover that you didn’t mention the entire third of the book that they spend on a tropical island, that’s a sign to cut or rewrite. If you can’t unpick your own story to write a clear synopsis, are you sure the reader will be able to? Did you have to change anything about the story (eg massively expanding a plot element you gloss over in the MS) to make it work as a synopsis? Does that tell you something?

Does the plot carry through? Where does the drama peak? Do we reach a resolution, rather than just an ending? Has something changed in the world, characters, or reader’s ideas? Does ‘The End’ feel natural and inevitable? (If it’s in a series, have you made the reader feel satisfied with this book while still giving her a reason to grab the next?)

Where are my big emotional/story pivots?

The moment one or both MCs realises they’re in lust or love, the moment of betrayal, the moment of despair. Have I fleshed these out enough? If my hero has been a jerk, is there payback? Is the mystery resolved, the villain caught, the lie exposed? Have I given those sufficient space for impact? (Or, if I’m doing some smartarse playing about with off-page-resolution, does it work?)

Can I remove any scaffolding?

Those bits that were a trudge to write but we had to get the characters from A to B while informing the reader of Z: do I need them? Can I cut them/replace with a single, ‘Three weeks later…’ line? My editor at Samhain once flagged up a lengthy bit of dialogue with the comment “This feels like you’re explaining the plot to yourself”, which still stings because hoo boy was she right. Write that scene/conversation by all means, if it helps. Then cut it.

Are all the plot elements relevant and resolved?

Don’t leave loaded Chekov’s guns lying around. If you put in eg the hateful stepfather’s threat to take over the family business, use it or lose it. Do not be in love with your amusing sassy neighbour if he has no actual plot role. Same with sequel-bait siblings/friends in romance. Make them earn their place.

How much worldbuilding have you done vs how much you need?

Historical novels and SFF might need a lot more than contemporaries, but that isn’t a licence either for 500 pages of plotless scene setting, or for an assumption that everyone is deeply familiar with your small American town as detailed over the previous 18 books.

Then, if writing genre especially, ask yourself what kind of book it is. I am not being simplistic here. I edited for years at Mills & Boon, I read slush pile by the metre, and I can’t tell you how many romance novels forgot to include the romance. No, really.

Sample questions for a romance writer. Adapt for your genre.

How prominent is the romance in my story?

Is that as prominent as it needs to be given the setting/secondary plot? If it’s a romantic suspense, you can’t do 10% romance and 90% suspense, but 10% suspense and 90% romance isn’t really going to fly either. Have I concentrated too much on other non-vital stuff, eg, the house renovation plotline, and thus ignored the romance between the hero and his two gay dolphin shifter lovers for chapters at a time?*

*a real book, I swear to you

Are there enough love scenes of appropriate heat for your story?

If it’s a sexy romance (not erotica), does each sex scene advance the plot/characterisation in some way?

Can you cut any of the sex scenes without losing something important? If yes, either do so or make them work for their inclusion.

You don’t need both internal and external conflict, but if you lack one, the other needs to be bloody good. If you can’t identify any conflict, what is driving your story, and what will give the reader any inducement to carry on reading? (If your answer is ‘they’ll just want to hang out with my characters being happy’, you’re either a spectacularly talented writer or, er, wrong.)

How have you paced the story?

It might be that you want a whirlwind romance focused entirely on the couple in bed, it might be you’re doing a slow-burn with a big cast where they don’t even meet till half way through, but either way we need to see the story develop steadily, enough to give us a plausible development of love, overcoming of conflict, and satisfying resolution, without longueurs or rushing.

If you’ve asked yourself all that you should have at least a pretty good idea of your story’s weaknesses, inadequacies, self-indulgences, and cheats that will allow you to move to step 2.ii.

2.ii Fill in the holes, shore up the structure, prune the growths.

Your second draft should be focusing on fixing the problems you’ve identified and marshalling your story elements into better shape. This might be small shifts of focus, or cutting the secondary plot with the amusingly camp neighbour’s dog, or giving the hero a new background and motivation, or replacing the MCs with two totally different characters (yep, been there). It might be a brief tidy of an existing MS, or a total rewrite from the ground up.

This is the part nobody can advise you on or, rather, the part for which there is infinite advice out there but you’ll need to go looking for what you specifically need–whether that’s advice on worldbuilding, pacing, characterisation, suspense plotting, or using sex scenes to build character.

In the end, you can only fix something when you have an idea of what’s wrong with it. So that’s Step 2, as best as I can advise you, except for:

Yup, sorry. Do it again. Reread your second draft for bits where the plot falls apart, bits where the characterisation isn’t singing, bits you want to skip because boring, bits you did a Note to Self on and then forgot about. Don’t stop looking at the structure until you feel that you know what you’re trying to do, and feel reasonably certain that you’ve done it.

This may all seem massive and daunting. It shouldn’t be. If you regularly read books and think about them, you already know what it looks like when a book is badly paced, has too much description, lacks conflict, has inconsistent characterisation etc. The hard bit is taking off your Proud Creator blinkers and/or the filter of knowing what you were trying to do, as opposed to what you actually achieved, and applying that critical insight to your own work. But that’s also a vital step in your evolution as a writer. Go to it, and good luck.

KJ Charles was an editor and book fixer for long enough to get a handle on Step 2 and is now a romance writer and 2018 RITA nominee. Her most recent release is Unfit to Print.

Where [oh God please please don’t say it] do you get your ideas? An unexpected inspiration

(Not) Writing a Book

Characters, Politics, Fish, and You

Self promo, bribery and free stuff (a post about me)

Writing the Synopsis: giving the editor what she wants
7 replies