‘The Ruin of Gabriel Ashleigh’ is out today as a short story from Loveswept. Huzzah! 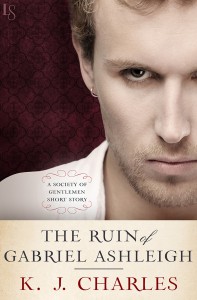 This is the story I originally wrote for the Another Place in Time anthology, which sparked the idea for the entire Society of Gentlemen trilogy. It’s the same story so for heaven’s sake don’t buy it twice. Or, do buy it twice in the full knowledge that’s what you’re doing. It’s a free country.

‘Ruin’ is the story of Lord Gabriel Ashleigh, a somewhat useless younger son, who has managed to get drunk and lose everything to notorious and sarcastic gambler Francis Webster. Ash has a last chance to win it back in one more card game, although the stakes come as something of a surprise. *cough* This is me getting very Georgette Heyer, except with binking, that being an area in which Georgette was reticent. I’m rather fond of this story and very happy to see it available now.

The story is set in autumn 1818, a few months before the events of A Fashionable Indulgence. It’s not crucial to the events of the trilogy, but if you’re interested in the backstory of Ash and Francis and the ghastly Lord Maltravers (all significant secondary characters throughout the trilogy), well, here it is. Oh, and if it seems handy, there’s a Society of Gentlemen cast list here.